Got a feeling that someone you know or care about isn’t behaving as they normally would? Perhaps they seem out of sorts? More agitated or withdrawn? Or they’re just not themselves. Trust that gut instinct and act on it.

R U OK? is a harm prevention charity that encourages people to stay connected and have conversations that can help others through difficult times in their lives.

By starting a conversation and commenting on the changes you’ve noticed, you could help that family member, friend or workmate open up. If they say they are not ok, you can follow the conversation steps to show them they’re supported and help them find strategies to better manage the load. If they are ok, that person will know you’re someone who cares enough to ask.

The media regularly reports on celebrities, sporting stars and other well knowns who are suffering mental health issues, often involving suicide. However, the average Joe or Jill are just statistics, and it’s the latest statistics that are staggering. In 2020 in Australia there were 3139 reported suicides (men: 2,384 women: 75). On average this represents eight Australians dying from suicide every day with the majority in the 15-44 age bracket.

The most common causes are broken relationships, natural disasters, helplessness and addiction. Self-harming and attempted suicides exceeded 65,000 in 2020 and these were only the reported ones.

RUOK Day is a nationally recognised day held to make us more aware of potential signs of self harm and what actions to take. No qualifications are needed – you do not need to be an expert to ask “ ARE YOU OK?“ Try practicing on friends or family. It’s not hard! 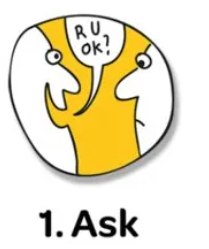 If they don’t want to talk, don’t criticise them LISTEN WITH AN OPEN MIND IF THEY NEED EXPERT HELP

Some conversations are too big for family and friends to take on alone.  If someone’s been really low for more than two weeks – or is at risk – please contact a professional as soon as you can. Find out more at www.ruok.org.au